This page was generated from tutorials/tutorial09.ipynb.

Download the Jupyter Notebook for this section: tutorial09.ipynb. View in nbviewer.

We created a cube size, 1, on a side for ode.World and gillespie.World. In this case the volume only matters, that is

This returns the same results. Because the volume is same as 1.

This seems reasonable in homogeneous system, but the cell is NOT homogeneous. So we need to consider a space for molecular localization.

You can use several types of space and simulation methods in E-Cell4. We show an example with spatial Gillespie method here.

In E-Cell4, the Spatial Gillespie method is included in meso module. Let’s start with run_simulation like ode.

At the steady state, the number of C is given as follows:

You will obtain almost the same result with ode or gillespie (may take longer time than ode or gillespie). This is not surprising because meso module is almost same with Gillespie unless you give additional spatial parameter.

Next we will decompose run_simulation. 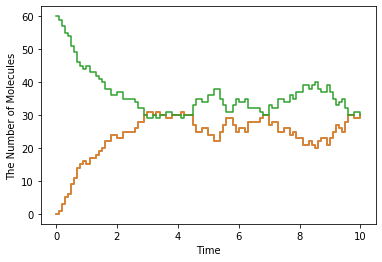 This is nothing out of the ordinary one except for meso.World and meso.Simulator, but you can see some new elements.

First in w.bind_to(m) we asscociated a Model to the World. In the basic exercises before, we did NOT do this. In spatial methods, Species attributes are necessary. Do not forget to call this. After that, only the World is required to create a meso.Simulator.

Next, the important difference is the second argument for meso.World, i.e. Integer3(1, 1, 1). ode.World and gillespie.World do NOT have this second argument. Before we explain this, let’s change this argument and run the simulation again.

You must have the different plot. If you increase value in the Integer3, you will have more different one.
Actually this second argument means the number of spatical partitions. meso is almost same with gillespie, but meso divides the space into cuboids (we call these cuboids subvolumes) and each subvolume has different molecular concentration by contrast gillespie has only one uniform closed space. So in the preceding example, we divided 1 cube with sides 1 into 64 (4x4x4) cubes with sides 0.25. We threw 60 C molecules into the World. Thus, each subvolume has 1 species at most.

Where the difference is coming from? This is because we do NOT consider molecular diffusion coefficient, although we got a space with meso. To setup diffusion coefficient, use Species attribute 'D' in the way described before (2. How to Build a Model). As shown in 1. Brief Tour of E-Cell4 Simulations, we use E-Cell4 special notation here.

We have used add_molecules function to add molecules to World in the same manner as ode or gillespie. Meanwhile in meso.World, you can put in molecules according to the spatial presentation.

Furthermore, if you have Jupyter Notebook environment, you can visualize the molecular localization with ecell4.plotting module, plotting.plot_world or simply show. 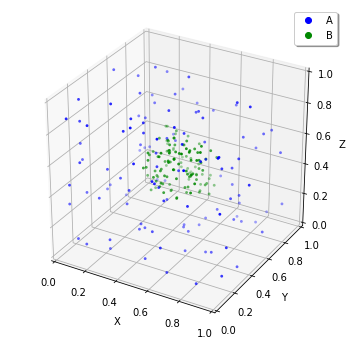 plotting.plot_world function visualize the location of the molecules in Jupyter Notebook cell by giving the World. You can set the molecule size with radius. Now you can set the molecular localization to the World, next let’s simulate this. In the above example, we set the diffusion coefficient 1 and the World side 1, so 10 seconds is enough to stir this. After the simulation, check the result with calling plotting.plot_world again.

9.5. Molecular initial location and the reaction¶

This is an extreme example to check how the molecular localization affects the reaction.

This model consists only of a simple binding reaction. The World is a long x axis cuboid, and molecules are located off-center.

On a different note, there is a reason not to set Integer3(0, 0, 0) or Integer3(9, 0, 0). In E-Cell4, basically we adopt periodic boundary condition for everything. So the forementioned two subvolumes are actually adjoining.

After realizing the location expected, simulate it with meso.Simulator. 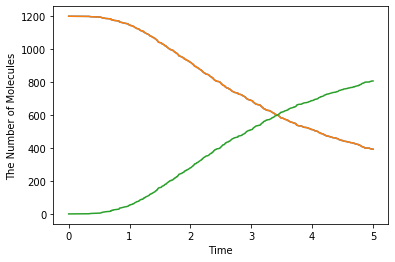 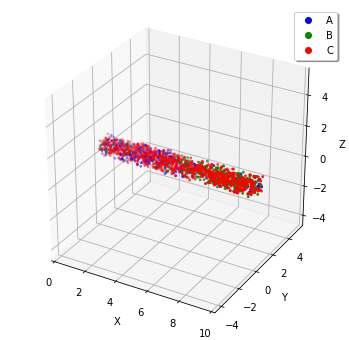 To check the effect of initial coordinates, we recommend that you locate the molecules homogeneously with meso or simulate with gillespie.

The solid line is biased case, and the dash line is non-biased. The biased reaction is obviously slow. And you may notice that the shape of time-series is also different between the solid and dash lines. This is because it takes some time for the molecule A and B to collide due to the initial separation. Actually it takes \(4^2/2(D_\mathrm{A}+D_\mathrm{B})=4\) seconds to move the initial distance between A and B (about 4).