This page was generated from tutorials/tutorial10.ipynb.

Download the Jupyter Notebook for this section: tutorial10.ipynb. View in nbviewer.

In other words, the spatical resolution of spatical Gillespie method is equal to the side of a subvolume \(l\). To improve this resolution, we need to make the size of \(l\) small. But in this method the \(l\) must be larger than the (at least) 10 times the diameter of molecule \(R\).

Spatiocyte has an ID for each molecule and the position of the molecule with single-molecule resolution. For the higher spatial resolution, Spatiocyte has 100 times smaller time-step than spatical Gillespie, because the time scale of diffusion increases with the square of the distance.

Next, let’s try the Spatiocyte method.

There is a distinct difference in the second argument for spatiocyte.World. This is called voxel radius. Spatiocyte defines the locations of the molecules with dividing the space with molecule size, and call the minimum unit for this space as Voxel.

In most cases the size of the molecule would be good for voxel radius. In this example, we set 5 \(\mathrm{nm}\) as the radius of the molecule in the space with the side 1 \(\mathrm{\mu m}\) . It takes more time to simulate, but the result is same with ODE or Gillespie. 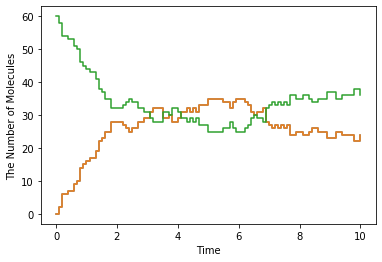 10.2. The Diffusion Movement of Single Molecule¶

Next let’s simulate single molecule diffusion to check the resolution.

Particle contains the particle position, species type, radius, and diffusion coefficient. You can inspect the Particle with the particle’s ID, pid.

get_particle method receives a particle ID and returns the ID and particle (of cource the ID are same with the given one). You can inspect the coordinate of the particle as Real3 with position() method. It is hard to directly read the coordinate, here we printed it after converting to tuple. As you can see the tuple coodinate is slightly different from the original position given as a Real3. This is because Spatiocyte can place the molecule only on the lattice. SpatiocyteWorld places the molecule a center position of the nearest lattice for the argument Real3.

You can visualize the coordinate of the molecule with plotting.plot_world method, and check the molecule in the center of the World. 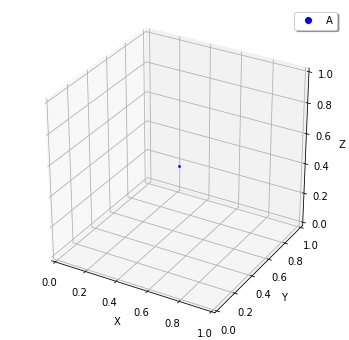 And you can use FixedIntervalTrajectoryObserver to track the trajectory of molecular diffusion process. 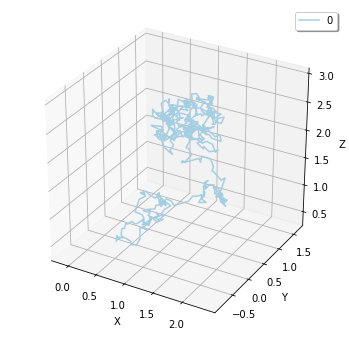 Here we visualized the trajectory with plotting.plot_trajectory method, you can also obtain it as Real3 list with data() method.

Also you can obtain the particles in bulk with list_particles_exact method and a Species.

Please remember list_particles_exact method, this method can be used for other World as well as add_molecules method.

10.3 The Diffusion Coefficient and the Second-order Reaction¶ 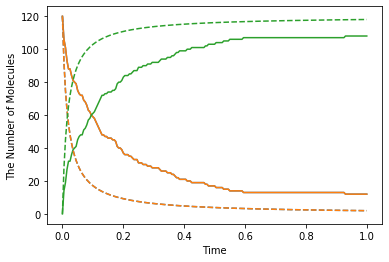 Although we used faster kinetic constant than before, the result is same. But by contrast with ODE simulation, you can find the difference between them (solid line is spatiocyte, dash line is ode). Is this fault of Spatiocyte? (No) Actually Spatiocyte reaction rate couldn’t be faster, while ODE reaction rate can be faster infinitely.

In the case of the above Jupyter Notebook cell, \(k_D=4\pi RD_\mathrm{tot}\) is almost 0.25 and “microscopic” rate constant is 1.0. So the “macroscopic” rate constant is almost 0.2. (However unless you specify the configuration for Spatiocyte, the second order reaction rate must be slower than \(3\sqrt{2} RD\), and the dissociation constant \(k_D\) is also \(3\sqrt{2} RD\).) The single molecule simulation method can separate molecular “diffusion” and “reaction” in accurate manner contrary to ODE or Gillespie method supposed well mixed system (that is diffusion coefficient is infinite). However if the microscopic rate constant \(k_D\) is small enough, the macroscopic rate constant is almost equal to microscopic one (reaction rate-limited). 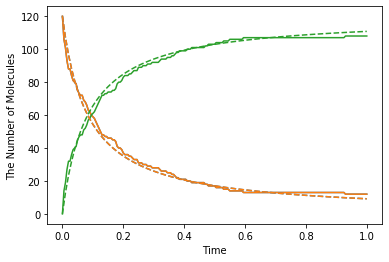 Next we explain a way to create a structure like cell membrane. Although The structure feature in E-Cell4 is still in development, Spatiocyte supports the structure on some level. Let’s look a sphere structure as an example.

To restrict the molecular diffusion inside of the sphere, first we create it.

Visualize the state of the World. 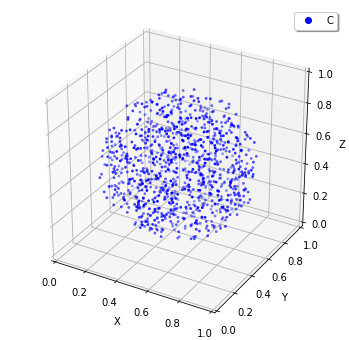 You can see those distribution with viz.plot_world as above. (However, the number of the species is too large to visualize all. So we plot only a part of it, but actually the sphere is fully occupied with the Species.)

Next we create Species moving inside this sphere. To that end we give location attribute to the Species. After that, you just throw-in molecules to the World with add_molecules function. 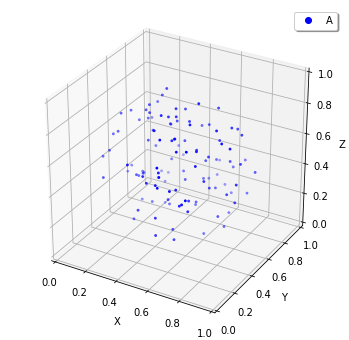 We can use FixedIntervalTrajectoryObserver to check the restriction of the diffusion area. 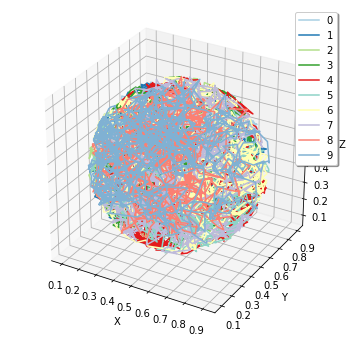 10.5 The structure and the reaction¶

At the end, we explain about molecular translocation among the structures.

Next let’s create a planar surface structure. To create a surface, we need to use three Real3, those are original point (origin) and two axis vector (unit0, unit1): ps = PlanarSurface(origin, unit0, unit1).

Suppose Species A on the surface, ps, and a normal Species B. 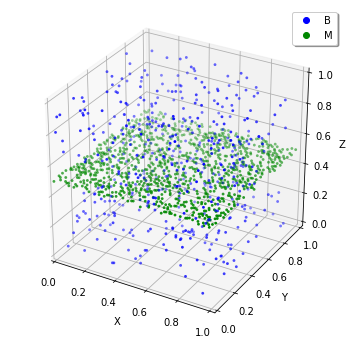 It might be hard to see them, but actually the Species B are placed only not on a surface. Then how can we make absorbed this Species B to a surface M and synthesize a Species A?

This means that a Species B becomes A when B collides with a structure M. On the other hand, a species A dissociates from the structure, and becomes M and B on as the reverse reaction direction.

Now you can simulate this model with a structure. 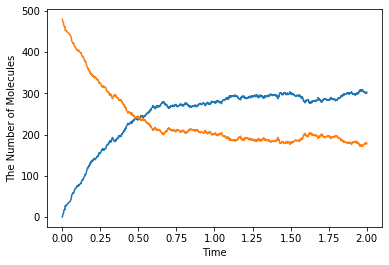 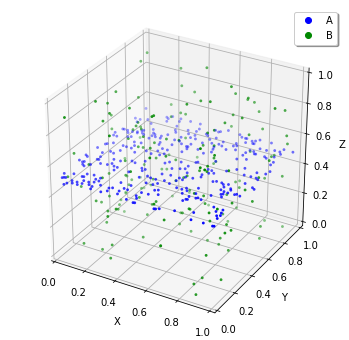 In the dissociation from a structure, you can skip to write the structure. Thus, A > B just means the same as A > B + M in the above. But in the binding, you can NOT. Because it is impossible to create A from B with no M around there. By contrast the species A wherever on the sphere M can create the species B. The first order reaction occurs in either presence or absence of the structure. But, in the case of the binding, the second order reaction turns into the first order reaction and the meaning of rate constant also changes if you ignore M in the left-hand side.