This page was generated from tutorials/tutorial01.ipynb.

Download the Jupyter Notebook for this section: tutorial01.ipynb. View in nbviewer.

First of all, you have to load the E-Cell4 library:

There are three fundamental components consisting of E-Cell System version 4, which are Model, World, and Simulator. These components describe concepts in simulation.

Model is independent from solvers. Every solver can share a single Model instance. Each solver alogrithm has a corresponding pair of World and Simulator (these pairs are capsulized into Factory class). World is not necessarily needed to be bound to Model and Simulator, but Simulator needs both Model and World.

Before running a simulation, you have to make a Model. E-Cell4 supports multiple ways to buld a Model (See 2. How to Build a Model). Here, we explain the simplest way using the with statement with reaction_rules:

Please remember to write parentheses () after reaction_rules. Here, a Model with two ReactionRules named m1 was built. Lines in the with block describe ReactionRules, a binding and unbinding reaction respectively. A kinetic rate for the mass action reaction is defined after a separator |, i.e. 0.01 or 0.3. In the form of ordinary differential equations, this model can be described as:

E-Cell4 has a simple interface for running simulation on a given model, called run_simulation. This enables for you to run simulations without instanciate World and Simulator by yourself. To solve this model, you have to give a volume, an initial value for each Species and duration of time: 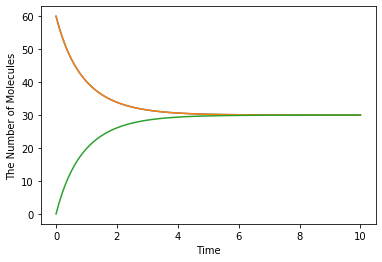 To switch simulation algorithm, you only need to give the type of solver (ode is used as a default) as follows: 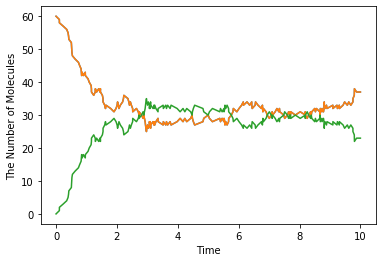 The with statement with species_attributes is available to describe these properties:

Species attributes could be a string, boolean, integer or floating number.

Now you can run a spatial simulation in the same way as above (in the case of egfrd, the time it takes to finish the simulation will be longer): 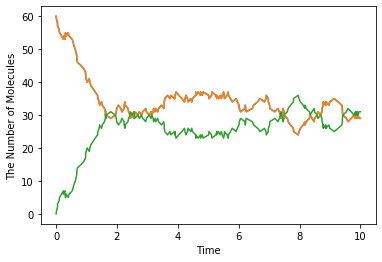 Structure (e.g. membrane, cytoplasm and nucleus) is only supported by spatiocyte and meso for now. For the simulation, location and dimension that each species belongs to must be specified in its attribute.

E-Cell4 supports primitive shapes as a structure like Sphere:

E-Cell4 provides various kinds of Observers which log the state during a simulation. In the following two observers are declared to record the position of the molecule. FixedIntervalTrajectoryObserver logs a trajectory of a molecule, and FixedIntervalHDF5Observer saves World to a HDF5 file at the given time interval:

E-Cell4 has a function to visualize the world which is also capable of interactive visualization named plotting.plot_world. plotting.plot_world plots positions of molecules in 3D. In addition, by using load_world, you can easily restore the state of World from a HDF5 file: 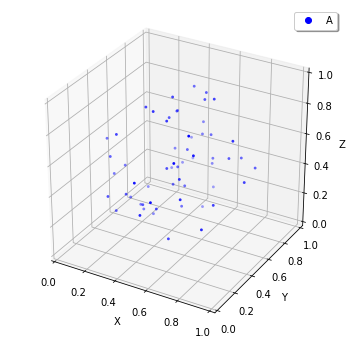 Also, for FixedIntervalTrajectoryObserver,viz.plot_trajectory generates a plot of the trajectory. (Again, it is possible to generate interactive plots.): 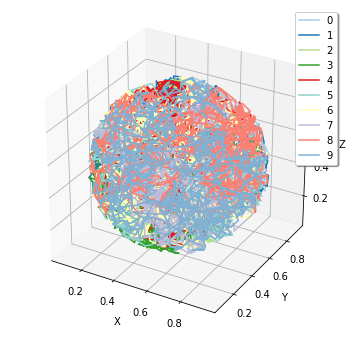 For more details, see 5. How to Log and Visualize Simulations.