This page was generated from tutorials/tutorial02.ipynb.

Download the Jupyter Notebook for this section: tutorial02.ipynb. View in nbviewer.

2. How to Build a Model¶

Model is composed of a set of Species and ReactionRules.

Species can be generated by giving its name:

Species has a set of APIs for handling its attributes:

There is a shortcut to set the attributes above at once because radius, D (a diffusion coefficient) and location are frequently used.

The equality between Species is just evaluated based on their serial:

A Species consists of one or more UnitSpecies:

A Species can be reproduced from its serial. In the serial, all UnitSpecies are joined with the separator, dot .. The order of UnitSpecies affects the Species comparison.

UnitSpecies can have sites. Sites consists of a name, state and bond, and are sorted automatically in UnitSpecies. name must be unique in a UnitSpecies. All the value have to be string. Do not include parenthesis, dot and blank, and not start from numbers except for bond.

UnitSpecies can be also reproduced from its serial. Please be careful with the order of sites where a site with a state must be placed after sites with no state specification:

Of course, a site of UnitSpecies is available even in Species’ serial.

ReactionRule consists of reactants, products and k. reactants and products are a list of Species, and k is a kinetic rate given as a floating number.

Here is a binding reaction from A and B to C. In this reaction definition, you don’t need to set attributes to Species. The above series of operations can be written in one line using create_binding_reaction_rule(Species("A"), Species("B"), Species("C"), 1.0).

You can also provide components to the constructor:

You have learned how to create some Model components. Next let’s put the components in a Model.

Now we have a simple model with the binding and unbinding reactions. You can use species_attributes and reaction_rules to check the Model.

For your information, all functions related to Species, ReactionRule and NetworkModel above are also available on C++ in the same way.

Finally, you can solve this model with run_simulation as explained in 1. Brief Tour of E-Cell4 Simulations :

2.4. Python Utilities to Build a Model¶

As shown in 1. Brief Tour of E-Cell4 Simulations, E-Cell4 also provides the easier way to build a model using with statement:

For reversible reactions, == is available. In the with statement, undeclared variables are automaticaly assumed to be a Species. Any Python variables, functions and statement are available even in the with block.

Meanwhile, once some variable is declared even outside the block, you can not use its name as a Species as follows:

In the absence of left or right hand side of ReactionRule like synthesis or degradation, you may want to describe like:

However, this is not accepted because of the syntax rule on Python. To describe this case, a special operator, tilde ~, is available. ~ sets a stoichiometric coefficient of the following Species as zero, which means the Species is just ignored in the ReactionRule.

The following Species’ name is not necessarily needed to be the same as others. The model above describes \([A]'=2-1\times[A]\): 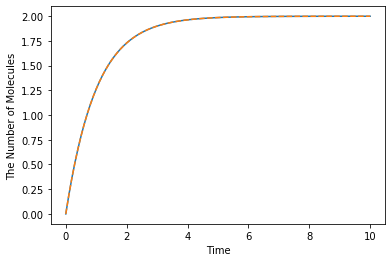 A chain of reactions can be described in one line. To split a line into two or more physical lines, wrap lines in a parenthesis:

The method uses global variables in ecell4.util.decorator (e.g. REACTION_RULES) to cache objects created in the with statement:

This method is modular and reusable relative to the way using with statement.

The functions decorated by species_attributes and reaction_rules are also reusable in the with statement.